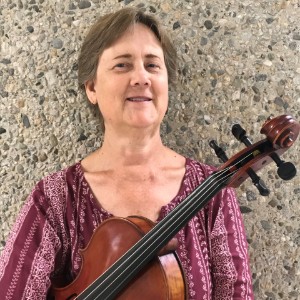 Carol is an active violist in the New London area, as a member of the Eastern Connecticut Symphony Orchestra, and the orchestras of Salt Marsh Opera, Opera Theater of Connecticut, Mystic River Chorale, and Con Brio. She has also played with the Hartford Symphony, Rhode Island Philharmonic, Orchestra New England, Tacoma (WA) Symphony, Waterbury Symphony, New Britain Symphony, and has performed at Mohegan Sun Casino with such legends as Earth, Wind and Fire, Celtic Woman, The Irish Tenors, Smokey Robinson, David Gates, and Electric Light Orchestra.

Carol has a great love for chamber music which started while a student at Hartt School of Music, inspired by the Emerson String Quartet, in residence there at the time. She participated in the Yellow Barn Chamber Music Festival, directed by David Wells and Eric Rosenblith, and the New England Conservatory Summer Chamber Music Festival. Her piano quartet ‘Genisius’ was a featured group in the Christ Episcopal Church (Norwich) chamber music series for many years. She currently plays in a string quartet with members of the ECSO.

While a student at Hartt, Carol studied with Eric Rosenblith, Charles Treger, and Rafael Druian, and continued studies with Jesse Levine of Yale School of Music. She had chamber music coachings with members of the Emerson Quartet, Renato Bonacini and Luis de Moura Castro.

As a teacher, in addition to establishing a sound technical basis and working toward a high level of musicianship, Carol tries to cultivate a love of music in her students. She realizes that every student has his/her own strengths and weaknesses, as well as differing goals for playing violin or viola, and adjusts her teaching style accordingly. She teaches students how to practice “smart” to get the most out of their practice time. Carol is currently working on a method book to help beginning-intermediate students understand playing in different keys.