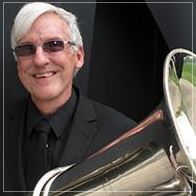 From his hometown of Omaha, Nebraska, Gary attended the University of Kansas and the University of Northern Colorado where he received his Bachelor and two masterss degrees in tuba and music theory and composition. An active performer, conductor, educator, and composer, he is published by Cimarron Music and Theodore Presser.

Besides his career in the United States Coast Guard Band as principal tubist from 1976 to 1998, Gary has performed with the Long Beach (CA) Symphony, San Carlo Opera, taught at Pepperdine University, and currently performs with the tuba/euphonium quartet Alchemy, Finest Kind (folk, jazz, sea music), Bez Granica (Balkan brass band), and the Boston Festival Orchestra. Gary´s involvement in an ongoing study of whales and music earned him the distinction of being the first tuba soloist to be interviewed by Johnny Carson and featured with the Tonight Show´s NBC Orchestra in May 1979.

He has performed throughout the world, playing in such prestigious venues as Carnegie Hall, the Kennedy Center, and Oktoberski Hall in St. Petersburg, Russia. He was a featured soloist at the International Tuba and Euphonium Conferences in Riva del Garda (Italy), the University of Minnesota, the Regina (Saskatchewan) Conservatory of Music, and at the University of Massachusetts, where he was presented the “Diversity Award” for his varied contributions as performer and composer of numerous styles of music that include tuba. Gary also directs TubaChristmas concerts yearly in Connecticut and Rhode Island.

Gary has had many works written for him as a soloist, including Roger Kellaway´s “Arcades I for Tuba and Piano,” George Heussenstamm’s “Dialogues for Alto Saxophone and Tuba,” Allan Blan’s “Divertimento for Tuba and Band’,” Vaclav Nelhybel´s “Concerto for Tuba,” Geoffrey Gibbs’ “Days of the Maya,” works by Edward Diemente, Orlando Garcia, Dennis Kam, Lyn Goeringer, Antony Paasch, Eliane Aberdam, Arthur Kreiger, and his own “Yves Tanguy-Images in Sound” (for tuba and electronics) and “Conversations With Grac” (for tuba and humpback whale).

Gary’s recent solo appearances have included recitals and master classes at Connecticut College, Lafayette College of Pennsylvania, the University of Northern Colorado, the United States Coast Guard Academy, North Canyon High School in Phoenix, AZ, and William Patterson University in New Jersey. Since 2005, Gary has been featured each February in recitals throughout Germany. His ensemble, Alchemy, is the featured ensemble at the yearly Northern German Brass Workshop in Jever.