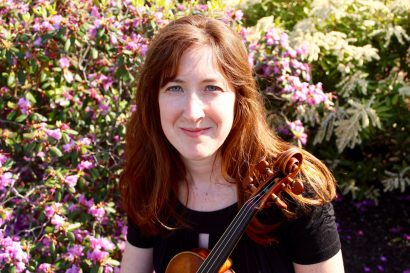 Lisa Gray is an accomplished violinist and dedicated teacher. Lisa was delighted to join the faculty at the Thames Valley Music School in New London, CT in 2015 where she teaches Suzuki violin and conducts the Beginning Strings Orchestra. She maintains a private studio, taught at Music and Arts in Waterford and was a faculty member of the Community Music School in Essex for over 10 years. She continues to mentor students as a visiting artist at the Waterford and Groton High School orchestras and the Eastern Connecticut Youth Symphony Orchestra. She also helped begin the Music City Strings program located in New London.

In addition to orchestral playing, Lisa performs frequently throughout Connecticut and Rhode Island in solo and chamber music recitals often collaborating with other great musicians from traditional string quartet to guitar to harp and to voice. She is an active member of the Riverside String Quartet who performs regularly around Southeastern Connecticut. Lisa’s chamber music skill were further enhanced through the 20/20 Chamber Music program at the Hartt School. This program provided opportunities to work in a variety of chamber ensembles with coaching from members of the New York Philharmonic and the Julliard Quartet in addition to a full scholarship to the Hartt School.

Lisa began her violin studies at the age of five in the Suzuki program with Harriette Hurd and Ronda Cole and continued on to attend the Eastman School of Music in Rochester, NY where she studied with Mitchell Stern and Ilya Kaler. She graduated in May 2001 with a Bachelor of Music in Violin Performance. Lisa returned to school graduating in May 2017 from the Hartt School of Music with a Master of Music in Violin Performance with Suzuki Pedagogy Emphasis where she studied with Katie Lansdale, Teri Einfeldt and Christie Felsing. This brought her playing and teaching to even greater heights.

Other interests include playing the piano and soccer though the majority of her time is spent being a mother to her three children.